2016 May Sunday 14:00-15:00
At a cafe in Wangfujing Xiaochijie 王府井小吃街
Participants: 3 ladies and 4 gentlemen, 1 captain
Language: English/Japanese

The 7 runners, who came to Beijing to participate in Great Wall of China Marathon, stepped in Kurukurukai!  They ran the marathon race in the previous day, thus they must have been extremely tired.  However, the participants firstly went shopping in Xiushuijie (秀水街)  and came to Kurukurukai.  What vigorous runners!

After the Rubik’s cube lesson starts, the two ladies who came from Philippines were always smiling and provided a very good mood in the Rubik’s cube class.  The gentleman from India has an engineering background and he was earger to understand the logic behind the procedure in the manual.  He proceeded the steps just by reading the manual before I expalined the procedure.  It was very surprising.  Another gentleman from Ireland, who is an ultra-marathon runner, showed some interest in OMEGATHLON!  I am not very sure whether he continue turning Rubik’s cube, but he would be the second OMEGATHLETE, if he mastered the Rubik’s cube!

A Japanese lady, who joined Kurukurukai together with her son, completed six faces of Rubik’s cube with help from her son.  He knew how to play Rubik’s cube because he had played Rubik’s cube when he was a student.  This is the first time for Kurukurukai to have a participant who know how to complete 6 faces of Rubik’s cube.  Another Japanese gentleman is an organizer of Great Wall of China Marathon 2016.  Although he was exhausted due to the race management of the previous day, he did not lose his concentration toward the cube and completed 6 faces.

Kurukurukai was held in Wangfujin Xiaochijie.  If Chinese people who know Beijing heard that this kind of event were held at the center of the busiest tourist shopping area, they would be very surprised.  It was raining at that day, and fortunately no tourist visited the open cafe where Kurukurukai was held.

I wish every participants continue cubing and report their master on Rubik’s cube to Kurukurukai! 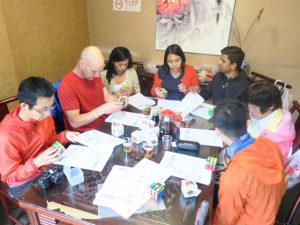 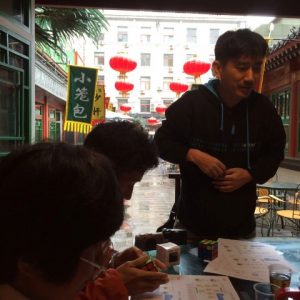 It was raining. Nobody sits on the table outside. 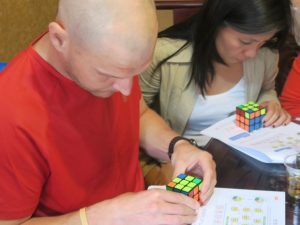 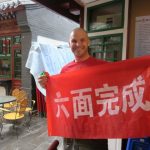 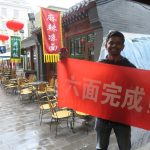